Do You Use Prepositional Phrases? Delete These 11 Expressions 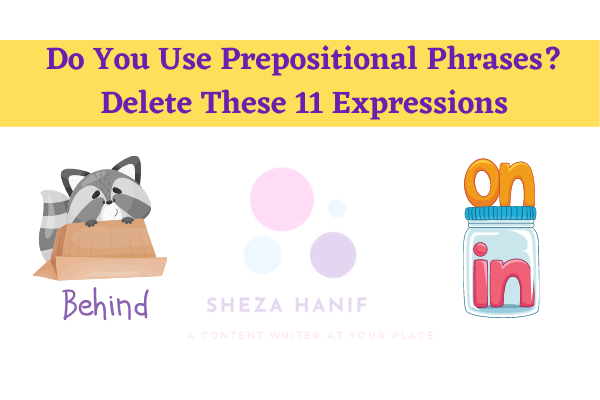 This article is about prepositional phrases, but first I want to talk to you about a minor annoyance and an email from a scammer.

Do you know the game hints? I personally think it is terrible. You have to portray the word without speaking, for example, apple or cyclist. And while you are cycling or pretending to eat an apple, the other players have to guess what you mean. Embarrassing.

But you can also play this game with language in a subtler way. Recently I received a known phishing email. The fake message was supposedly sent by the inspection of the Ministry of Health, Welfare and Sport.

The scammers who wrote the text, may as a punishment play hints in hell forever. Because I have to give them something: they succeed in imitating the language use of ministries. I would almost fall for it. Take this passage from the letter.

We have still not received a response from your side in relation to the complaint we have submitted.

The sentence contains two wonderful examples of so-called prepositional phrases’ expressions: ‘from your side’ and with ‘related to’.

What are prepositional phrases’ expressions?

Preposition phrases are – as the name implies – formulations that are full of prepositions, such as ‘in’, ‘as’, ‘before’, ‘from’, ‘and so on’.

They pop up a lot in official, legal and business texts because people subconsciously use prepositional phrases when trying to impress you. They put their chest out in complex language: look how official this sounds. Listen, though.

In reality, it makes your texts long-winded and incomprehensible. Your readers get lost in a forest of prepositions. Preposition expressions make something simple unnecessarily complicated. You can easily replace ‘from your side’ and ‘regarding’ with words like ‘from’ and ‘about’. Watch.

We have still not received a response from your side in relation to the complaint we have submitted.

This can be shorter and more understandable:

We have still not received a response from you regarding the complaint we have submitted.

It is actually funny that fraudsters use the official language with preposition expressions in phishing emails. This style apparently symbolizes the working method of civil servants.

Maybe it will open the eyes of writers in ministries or legal departments. It’s like being imitated by Carlo Boszhard at the TV canteen. Suddenly you hear yourself how often you use a certain stop word or language.

But there is still a long way to go. Many official, legal, and business texts still pour out a deluge of prepositional phrases on the reader. (Read this message from the Government Gazette)

Do you feel yourself infected with the preposition virus? See if you’re using one of the 11 most common prepositional expressions. And think about how you can replace these expressions with short and powerful formulations from now on.

The plant died as a result of the drought.

That can be shorter.

The plant died from the drought.

Frenkie de Jong releases Messi for the keeper by means of a smart pass.

Frenkie de Jong released Messi with a clever pass for the keeper.

Due to the weather, we have cancelled the gym ball game for the over 60s.

No, don’t write as a retired civil servant.

Due to the weather, we cancelled the gym ball game for the over 60s.

The text on the door of the toilet has not yet been approved by the Ministry.

Keep it short and sweet:

The text on the toilet door has not yet been approved by the ministry.

On the occasion of our 30th wedding anniversary, we have breakfast with pancakes.

Because of our thirty-year marriage, we have breakfast with pancakes.

This is an allowance in favor of retired boxers.

A boxer says what he means, so not so elaborate:

This is an allowance for retired boxers.

From the point of view of the Bible, you cannot lie.

Don’t write out of the blue, without a prepositional phrase:

According to the bible, you should not lie.

He placed this bench for the benefit of the elderly in the neighborhood.

They also understand it with normal language:

He placed this bench for the elderly in the neighborhood.

You can find the secret treasure using this map.

With this map, you can find the secret treasure.

The tramp was refused entry to the restaurant on the grounds of his clothing.

The tramp was refused entry into the restaurant because of his clothing.

The parrot at the zoo was particularly known for one exclamation: “Get lost!”

This bird likes simple language, so don’t be so obscure with your prepositional phrase:

The parrot in the zoo was mainly known for one exclamation: ‘fuck off!’

Weren’t you so aware of prepositional phrases’ expressions? That is not surprising. At school, you probably learned to write grammatically correct. But have you also learned how to trick readers and make a text attractive? Probably not.

Entry Level Copywriter Jobs: Let’s Talk About
9 Ways to Find Freelance Writing Clients Who Will Actually Pay You
6 unexpected ways you’ll benefit from writing content
The Importance of Article Writing And How To Do It Effectively
“Never start a sentence with …” – 7 Writing Rules You Should Ignore
Writing an Introduction? This Step-by-Step Guide Will Help You
Finding Synonyms: 11 Tips for Varied Word Use in Your Texts