How to Use a Semicolon Correctly? Learn it Within 3 Minutes 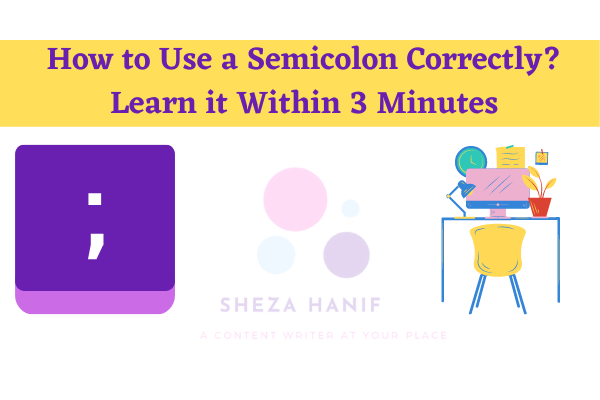 How to use a semicolon correctly? In the four years that I worked for a website, I used a semicolon once, incorrectly. In this article about musicians apprenticed to sports psychologists, the punctuation mark is in a place where a comma would have been enough.

From the footballers of Feyenoord to darter Raymond van Barneveld and skater and two-time Olympic medalist Kjeld Nuis; they all get help from sports psychologists.

How to use a semicolon correctly?

Why did I want to use a semicolon here so badly? Maybe I wanted to impress the reader. The American writer Kurt Vonnegut wrote the following in his essay A man without a Country :

Here’s a creative writing lesson. Rule 1: do not use a semicolon. (…) The only thing the punctuation mark does is show that you have studied. ‘

But although the semicolon has an elitist image, the punctuation mark is not superfluous. Sometimes you can clarify a text with this punctuation mark. What exactly is the function of a semicolon? How to use a semicolon correctly? Three insights that can help you with ‘semicolon setting’.

A semicolon separates sentences, but not phrases. The comma is already there for that.
You only put a semicolon in places where you would normally put a period, so between two parts of the text that can also function as an independent sentence.

But don’t you just put a period between sentences?

Normally yes, but sometimes a semicolon is better. You are actually saying: these are two separate sentences, but they are more closely related to each other. Often one sentence is the cause, an effect or a specific addition to the other sentence. Just look at the sentences below, in which the ‘;’ is in the right place.

Sara stayed in bed all day; she was sick

You go and eat in advance; I come home on foot because the train is not running.

Jan wanted to write a book, but he got a letter on paper; he had writer’s block.

Is it Better to Delete Unnecessary Adjectives from Your Text?
What’s an Auxiliary Verb? Why You Should be Careful?
When Do You Use a Comma? – A 5 Minute Course to Keep Momentum in Story

2 – A semicolon is not a colon

Sometimes you may be tempted to use a semicolon instead of a colon when announcing a bullet list. This punctuation mark is not actually intended for that.

A semicolon should only be included in an enumeration if you enumerate several sentences. You just start such a list with a colon. Then you use the; like a separation between enumerated parts, and you end with a normal period. Below an example.

If you want to become a good writer, you must:

3 – A semicolon is never really necessary

A semicolon is just a subtle clue and not a must. In fact, the punctuation mark indicates that your reader should take a slightly shorter reading break after a particular sentence than at a period. This makes the relationship between two sentences extra clear.

But in a well-written text, your reader can sense that coherence himself. A semicolon is therefore never a must. If you don’t want to make mistakes with it, you can simply choose never to use this punctuation mark.

How to use a semicolon correctly? Incidentally, the semicolon has had an additional function as a tattoo with a special meaning for several years (read which one).