When to Use a Hyphen in a Sentence Examples 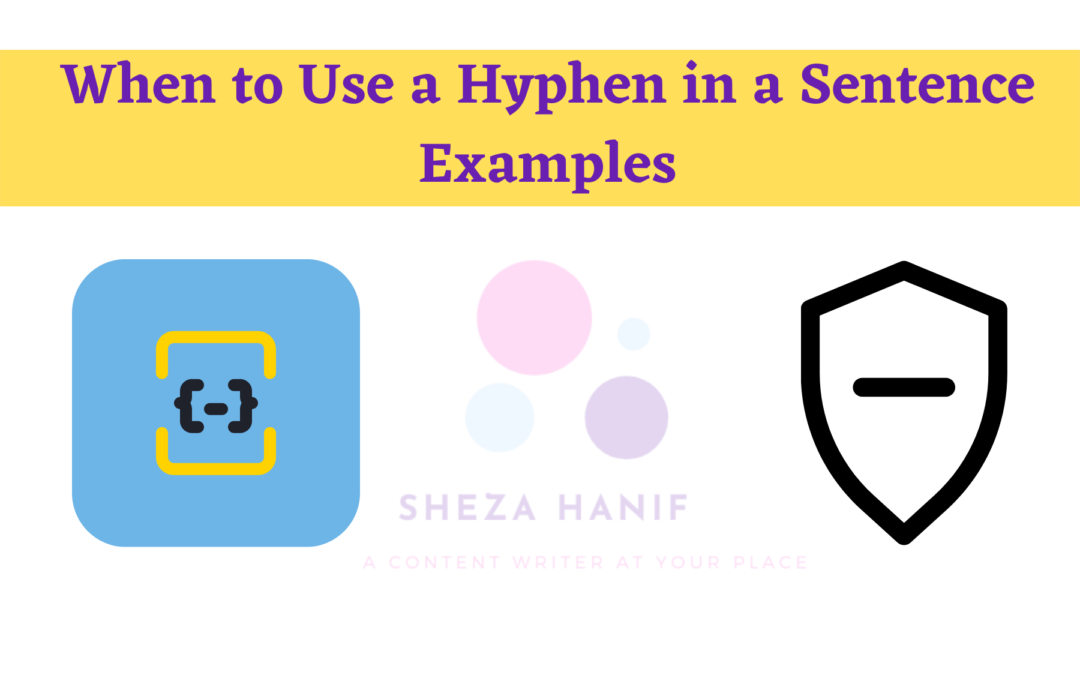 Do you know when to use a hyphen in a sentence with examples?

How to Use Hyphens with Compound Modifiers?

It’s simple to connect words with hyphens. Picking the correct words to link together is a little more complicated. Compound modifiers are our first stop.

A compound modifier is a pair of words that function like one adjective. When you connect terms with a hyphen, you convey to readers that they are meant to be used together.

When rebuilding, it’s best not to take down any load bearing walls.

It appears that you should not take down any load that is bearing walls in this statement. To ensure clearness, insert a hyphen between “load” and “bearing.”

The hyphen is required only if the two words are used as an adjective before the noun they’re describing. If the word comes first, don’t use a hyphen.

When your modifier consists of an adverb and an adjective, you don’t need a hyphen.

When to use a hyphen in a sentence with examples? Follow the same rules as any other compound modifier when used with a present or past participle.

Hyphen With a Present Participle, Adverb Or Adjective, and a Noun

When we join a noun or adjective with a present participle to make a unit of meaning that denotes another word, use a hyphen to make the distinction clear.

There are some beautiful looking trees in the garden.

Without the hyphen, your reader may become perplexed by the sentence. Perhaps there’s a new variety of trees called “the looking tree”?

When the modifier follows the noun it is describing, don’t use a hyphen.

When you use a hyphen to join two adverbs together, don’t do it.

When the compound follows the noun it modifies, don’t use a hyphen.

On the other hand, hyphenated words often develop into closed compounds (words with no hyphens) over time. Email rather than e-mail is becoming more widespread every day. If you’re unsure whether a word is a closed compound or a hyphenated one, look it up in your favorite dictionary.

Compounds are usually made up of two nouns that are used together to represent a single concept. “Open” implies a gap between the two words, and no hyphen is used. A good dictionary is an essential tool for determining whether or not a compound is open.

When words are spelled out, numbers between twenty-one and ninety-nine should be hyphenated.

Hyphen with Numbers in Compound Adjective

When numbers are used as the first component of a compound adjective, they should be connected with a hyphen to the noun that follows them. This way, the reader understands that both terms function together as a unit to modify another term. Whether it’s in words or figures, this rule applies whether or not there is a space between the number and the word following.

However, if the number is the second word in a compound adjective, there is no need for a hyphen.

Hyphen with Fractions in Compound Adjective

When a fraction (e.g., quarter or half) is used to construct a compound adjective, it should be hyphenated to avoid confusion among the reader as to which fraction is being modified by which noun.

Hyphen with Prefixes: All-, Self-, Ex-

Precede the prefix ex- (meaning “former”) with a hyphen.

Consider using a hyphen to connect the reflexive prefix self- with an adverbial phrase.

Try not to confuse the noun “self with the prefix “self.”

To put it another way, you should always use all as a preposition and hyphenate it.

Hyphens with Low or High

When a high- or low-level/low-impact compound adverb comes before the noun, it modifies, use a hyphen. High-level/low-level and high-impact/low-impact are examples of compound adjectives that use high and low.

That’s all about when to use a hyphen in a sentence with examples. I hope you have found this article helpful. For more articles, visit our blog. And don’t forget to subscribe to our YouTube channel.