Finding Synonyms: 11 Tips for Varied Word Use in Your Texts 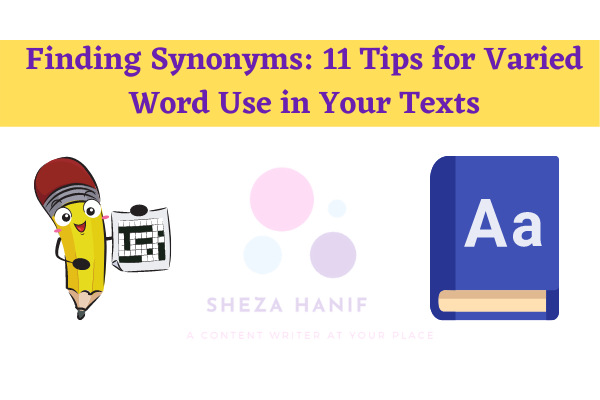 Finding synonyms? “You shouldn’t tell this any further,” a fellow journalist said to me recently. “But when I write an article and use the same word too often, I cheat a bit when looking for synonyms.” My interest was immediately piqued by that mysterious statement.

Every writer or journalist tries to use varied words with more or less the same meaning in his texts. Finding synonyms is important when writing a text. If you use too many of the same words or expressions, you will run into problems.

For example, I once wrote a story about the history of aphrodisiacs, or drinks and foods with an aphrodisiac effect.

I had just started as a freelance journalist and it was my debut for a new client, Quest Historie. Well! I did my very best on the story. I read food history books, googled my head and interviewed two historians.

In all my diligence, I overlooked something important: varied word usage. I got the first version back from an editor with the comment: “The story is well put together, but you really have to look for synonyms for aphrodisiacs.”

She was right. I made a beginner’s mistake. Aphrodisiacs appeared 29 times in the four-page article. That’s a lot for a word you can barely say three times without breaking your tongue about it.

I dare say that you cannot use any noun so often in a text. It’s like your little nephew is sitting at the piano playing the same note 29 times. Your reader is going to be upset.

In retrospect, when writing my article on aphrodisiacs, I should have used the tactics of the fellow writer who thinks he is ‘cheating’ when looking for synonyms. When working on an article, he often surfs to an online synonym dictionary. “That always feels a bit crazy,” he said. ‘A good writer should come up with original words and expressions himself. But sometimes I can’t do that. ‘

I don’t think it’s crazy to keep a synonym dictionary (I just bought this one) at hand, rather professionally. A good cook also sometimes reads a cookbook to improve his knowledge.

Finding Synonyms? Below 11 tips that I often have to remind myself of when I go on a synonym search to keep my story varied.

Word variation is good, but use as many terms as possible that you would use in a conversation.

But it could be worse. If you use ‘astrant’ as a synonym for ‘cheeky’, you can be sure that many readers will stop following you. The national dictation is probably the only text in which such a thing is possible.

2. Don’t use too many variations.

I usually use three variations of a word in a text, or a maximum of four if it is a long article. Of course, you can often find more synonyms.

Quite funny when the word ‘beer’ is alternated in an article lager, barley, golden yellow scamp, fun cylinder, a liquid sandwich, a Freddy and Spa gold. But you won’t take it seriously anymore.

3. Searching for synonyms is not always necessary, you can also describe them

You don’t have to find a perfect synonym for every word. A description every now and then is a good chance.

The woman gave the man an aphrodisiac. She enjoyed serving him a meal that turned him on, especially when she left him alone afterwards with an excuse “I have a date with a friend.”

4. The same word a few times is allowed: three times the max

You don’t have to come up with synonyms in the first sentences of an article. Three times the same word in a paragraph doesn’t have to be disturbing.

The rabbits jumped through the mud as Bob called for them to sit. The rabbits ignored him and gnawed at a carrot in the grass. Maybe rabbits just aren’t for me, Bob thought.

But three is the max in this case. In the next paragraph, it makes sense to look for a synonym for rabbits.

5. With word variation you don’t always need synonyms, a category is also possible.

For example, ‘rabbits are classified as’ animals’. If you have used rabbits three times and then refer to them as ‘animals’, everyone will understand what you mean.

The rabbits jumped through the mud as Bob called for them to sit. The rabbits ignored him and gnawed at a carrot in the grass. Maybe rabbits just aren’t for me, Bob thought.

It seemed as if the animals had heard him. Bob was left dazed, while the rabbits ran.

6. Referencing is also a kind of synonym.

An alternate word isn’t the only way to vary your word usage, of course. Referencing ‘them’ works just as well.

It seemed as if the animals had heard him. They run. Bob was left dazed.

7. Beware of subtle differences in meaning

There is a danger of varied word usage. Sometimes the meaning of two words that appear to be synonyms at first glance differs on an important point.

The man couldn’t say any more porridge. He allowed the dog to eat his food. “I had no choice but to allow it,” he said later.

In fact, this paragraph is incorrect. If you allow something, you do not oppose something. If something permits, you actively grant permission and the man here didn’t, after all, he couldn’t say any more porridge.

“I think you are great,” the woman said

“You are exhausting,” the man sighed.

“How unkind you are,” the woman yelled.

Do not. You cannot scream, grumble or sigh and at the same time utter a complete sentence intelligibly. ‘Saying’ is always enough.

9. Accept it. Some words have no synonym

10. Cheat with a synonym dictionary

There is a good chance that there is a good alternative for a word that you did not think of yourself. Take a look at this online synonym dictionary, for example.

Searching for synonyms becomes a lot easier with Van Dale’s 1215-page Large Synonyms Dictionary. This is an almost inexhaustible source of synonyms, including explanations of subtle meaning differences.

So, finding synonyms is not that difficult.

Entry Level Copywriter Jobs: Let’s Talk About
9 Ways to Find Freelance Writing Clients Who Will Actually Pay You
6 unexpected ways you’ll benefit from writing content
The Importance of Article Writing And How To Do It Effectively
“Never start a sentence with …” – 7 Writing Rules You Should Ignore
Writing an Introduction? This Step-by-Step Guide Will Help You